The Weslo Pursuit 360 R recumbent exercise bike is a simple and very useful bike. It comes with the almost every basic features not only necessary for exercising but also mixing the workout intensities. If you ought to purchase an indoor exercising bike which fits in an economical price bracket. Also, it should offer you the utmost exercising experience then the 360 R is should be your pick.

Keep reading further know the benefits of owning this bike and factors to keep in mind before getting this bike. 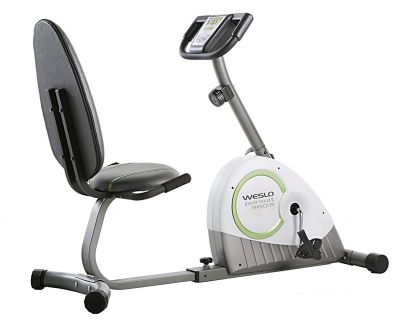 Weslo Pursuit 360 R recumbent exercise bike is not the oldest of brands which delivers the economical exercising equipment. This bike is more of a purpose-oriented exercise equipment than an entertainment fitness or leisure fitness scheme. The 360 R from Weslo Pursuit is a minimal exercising bike with limited resistance variations. On the contrary of minimalistic design, the console of the bike offers some of the best features at a low price.

Right from measuring the speed to measuring the heart rate of the rider is commendable. The apparent exercising bike will leave you in the surprised state of you go through the details of the features the 360R offers.

The resistance of the Weslo Pursuit 360 R recumbent exercise bike is a magnetic resistance. Many of us know its popular title as Silent Magnet Resistance (SMR). It has a greater advantage over using the standard weight flywheel. The SMR will not make any noise because the magnetic field generates the necessary resistance. On the other hand, the conventional flywheels provide the resistance due to their weight and hence whirring becomes common.

Apart from that, the 360R consists of various resistance options to choose from. You can easily select the least resistant for a long cardio of the most resistant for the endurance session. Moreover, the magnet of the bike rotate on a heavy-duty bearing with is again a silent component of the resistance drive.

The magnetic resistance is a great provision. It will not only reduce some weight of the bike but also deduce some manufacturing cost. In the same manner, the Weslo has prepared the bike to be utmost useful and affordable as well.

Coming to the monitoring part, the 360R consists of a simple yet feature loaded console. It shows the speed at which a normal bike would go upon paddling the same. Along with that, it shows the distance covered with similar constraint i.e. normal bike ones. Also, the time elapsed during exercising and the most important is the heart rate measurement.

Additionally, the console lets you choose from two different pacer programs which vary in resistance and intensity. Not to mention, the green tint-screen looks the best.

Apart from that, there can be one issue with the heartbeat receptor. It is a small receptor which will record the pulse when you place your thumb on it. Generally, this feature is not a common provision in the exercise bike of this segment. In contrast to that, this receptor can show inaccurate result at times. Sometimes, the error can occur if you do not place the thumb properly or due to mechanical limitations of the console.

Nevertheless, getting a pulse caliper is a huge thing to cherish for an affordable bike like this.

Finally, coming to the last component or feature to explain which is an important provision. The Weslo Pursuit 360 R recumbent exercise bike comes with an adjustable seat option. The frame of the bike has three-point holes which will elongate or shorten the distance between seat and handlebar.

In this manner, everyone would be able to paddle the bike with utmost comfort. However, sitting on this bike and paddling will be difficult for people shorter than five feet in height. Other than that, this bike will not be easy to paddle if you are taller than six feet four.

To cut a long story short, this bike of a simple yet sturdy design and construction. This will suits best to people who ought to exercise mildly or for muscle rehabilitation. We would not recommend this bike to strength training athletes, and short people.

This review covers the functioning of components by reviewing each them individually. However, you can leave a comment below in case of any query or further assistance/explanation regarding exercise bikes.