Nautilus U616 upright exercise bike is one of the most useful and convenient indoor exercise bikes for cardiovascular exercises. Also, it allows the user to perform the HIIT workout and also muscle building and training exercises. You will be surprised to know the actual weight this product has when it reaches your door after an order.

Additionally, the fitness meter/console with the backlight displays vivid real-time fitness status is just great. Not to mention, the dual-track screen and an accurate heartbeat measuring receptor. Go through the review to know about the U616 and unique features it offers.

About Nautilus U616 Upright Exercise Bike 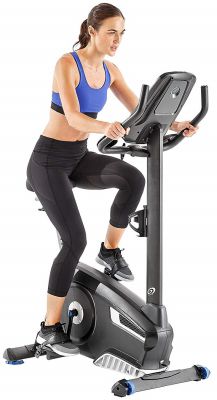 The Nautilus U616 upright exercise bike is merely a facelift of the U614 exercising bike. There is not much of a difference in the design and construction amongst the both. However, there are some enhanced features this bike offers which will add up to the great experience of exercising.

Having said that, the U616 comes with the great 25 resistance variations. Along with vivid user profiles which you can edit according to your workout pattern. Also, it offers 29 workout programs, 9 heartbeat control plans, etc. It will not only enhance your workout experience but also help you stay on your fitness path.

Apart from that, the other features of this bike show up the great effort designers have put. Speaking of which, there is a bottle holder below the fitness console. Also, its adjustable seat will be a great provision for adjusting the ride height for a short as well as a tall person.

Not to mention, there is a pair of two console screens which displays a maximum of information. That too, both the displays come with the backlight option. It is one of the rare features which seems not too big to pay attention to. But it can make all the difference if you workout late or early in the morning or prefer darkness.

The Nautilus U616 upright exercise bike has dual speakers which will never cut you off from music during workouts. The speakers will not sound the best you have heard but work really fine with the loudness and ease of operating.

Components of Nautilus U616 Bike

We have distributed the whole review into several small fragments by describing functioning and usefulness of all the components. Hence, you can get a detailed idea about the product by going through reviews of individual products. 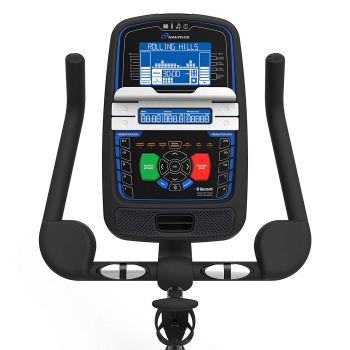 Starting with the best component and dominating feature of the Nautilus U616 upright exercise bike i.e. console. It shows your fitness-status while you perform the workouts. You will find many information and real-time data ranging from speed, distance, calories burned, exercised time, etc. Not to mention the telemetry Bluetooth belt included in this deal is capable of measuring accurate heartbeats and displaying on the console.

Apart from showing the information, there is a lot more to describe the console. It allows the user to save up to 12 distinct user profiles which will be the track record of workouts performed respectively. Additionally, it will allow you to workout on the pre-programmed 29 plans. In fact, you can even customize and save up to 4 exercising plans, two fitness tests, a recovery test, and a quick-start.

In addition to that, this console allows you to connect a Bluetooth device i.e. smartphone or tablet for remote operating the system. It will sync all the fitness data with the Bluetooth device’s data. Additionally, there are apps working which performs all such tasks and pairing. Apps i.e. Nautilus ConnectTM, MyFitnessPal, and Nautilus TrainerTM serve the similar purpose.

Finally, the console has a twin speaker which works on Bluetooth, USB, and other mp3 inputs. It makes exercising a lot entertaining and motivating.

The fan in the console set up is a mere luxury you can get on an exercising bike. It is a three-speed fan which can keep you fresh during a scrutinizing workout session. Although Nautilus U614 also has a fan we like this one better. Nevertheless, a fan this small will only give you chill breeze passing through your sweaty body. 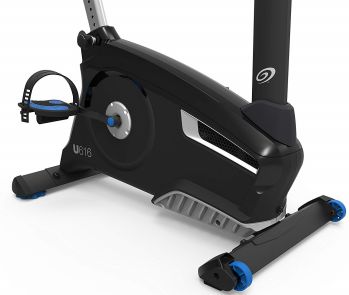 The bike weighs 76 pounds after packaging out of which the major weight is due to the flywheel. Such a heavy flywheel will not only offer you an active cardio workout but also the HIIT and Crossfit when required.

There are two small transporting wheels at the front bottom of the bike on the horizontal leg. To use these wheels, you shall firstly, tilt the bike forward similar to performing a stoppie. There the bike will get on the transport wheels.

However, handling a heavy equipment like Nautilus U616 upright exercise bike is not an easy task. Additionally, the wheels will not roll if tangled in any kind of obstacles. In fact, many people find it difficult to move the bike on a carpet.

Look for the merits and demerits of the Nautilus U616 upright exercise bike in this section.

Finally, we are done with the review and conclude with just a note i.e. if you can afford it get this bike only. It will be one of the pride moments for you owning useful equipment.

If you have any query, feel free to reach us via comments.