We have an indoor exercising equipment namely Schwinn A10 upright exercise bike to review. Looking at the bike, there is nothing seems to be out of normal features. On the contrary, there was a whole lot to experience after paddling it for a bit along with its speaker pumping motivation. Go through the review to understand the functions of each component sitting on the Schwinn A10.

About Schwinn A10 Upright Exercise Bike 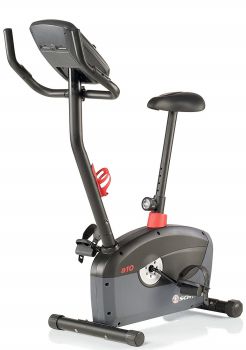 Schwinn is a gigantic brand which manufactures premium exercising pieces of equipment. You would have come across some products from this brand someday, that’s how popular this brand is!.

Moreover, Schwinn produces various types of indoor exercising bikes as well as treadmills and rowers. All of these machines focus on cardiovascular functioning, building core, legs, gluteals. On the other hand, these machines prove to be the best for the fat people who expect to work out for weight loss.

Although Schwinn A10 upright exercise bike is meant for taking a physical scrutiny you might not feel that while paddling. It has an mp3 connector which even works with a phone, along with stereo speakers. In fact, the wide detailed fitness meter will keep you engaged with its variety of data. If not data keeps you engaged, you can accommodate a book or tablet for infotainment while exercising.

Components of Schwinn A10

The Schwinn A10 upright exercise bike is just an outcome of all of its components put together. Here, we will describe the components of A10 individually. It will shed some light on the useful and not-so-useful features of the indoor bike.

Nevertheless, there is good about it too. Simpler the design, economical the cost will be. Looking at the bike, you will find a magnetic hub beneath the seat and a handlebar attached to a pipe. Also, that pipe comes from the closed section you see at the bottom of the bike.

Additionally, there is a bottle holder on the handlebar’s pipe which will be useful during intense cardio sessions. 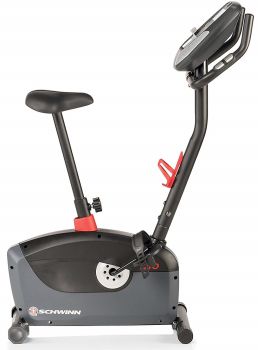 Schwinn A10 upright exercise bike has an effective magnet mechanism which provides various resistances. There are eight variations you can use, out of which seven would be preprogrammed whereas one for the instant start.

Apart from that, the magnetic mechanism avails variation of least resistance to the most. Hence, this bike will be useful for weight loss as well as gaining core, legs, gluteals strength.

However, paddles span a short length which can make paddling ineffective for people over six feet. 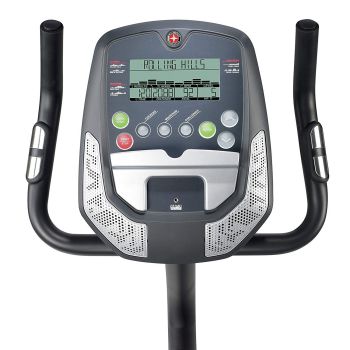 This fitness meter is wide as well as displays some vital data useful for the person paddling. It will display speed, exercise time, distance, heart rate, and calories burnt. Hence, you can have a track of the instantaneous status of your body.

On the contrary, there are some downsides to the display of the fitness meter. It does not have a backlight illuminating the screen. Also, the clamp for placing a book, smartphone, or tablet is in the proximity of the screen and covers it. Hence, using a tablet or a book will hide the screen.

On the other hand, there are some issues with the accuracy and reliability of the heartbeat sensor. There are pulse pickups on the handlebars which will sense the heartbeat rate. However, these receptors don’t function as accurate as some wireless receptors do.

This feature of Schwinn A10 upright exercise bike makes it stand out of all the other bikes. It is very exciting to come across a product for the first time and never losing interest for many years.

There is a drawback about these speakers, although they are loud and clear they won’t produce a soothing sound. Generally, people don’t require a melody during a workout, especially during a HIIT. Nonetheless, these speakers will produce the beats which give tremors to the bike. 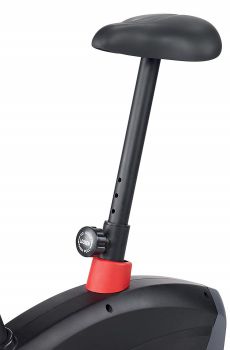 This feature will helpful for you to get to a suitable or comfortable stance while paddling. However, it will not be a sufficient adjustment option for tall people. Because the bike despite having the adjustable seat and handlebar will have a rigid stance. Hence, people taller than 6 feet will have a hard time paddling for a longer time.

Pros/Cons of Owning a Schwinn A10 Upright Exercise Bike

Look for the positives and negatives of the Schwinn A10 upright exercise bike in this section.

Finally, we have provided everything important about this product. Now it is up to you to decide if the speaker attract you the most or the real-time fitness meter or anything else. However, feel free to contact in case of any query.