Getting on to an indoor exercise bike daily to deal with the increasing weight or decreasing stamina? How do you imagine yourself to be looking after doing just intense cardio on a standard exercise bike without the involvement of the upper body movements? Well, Schwinn AD6 Airdyne Upright Exercise Bike seems to be the solution to these problems. 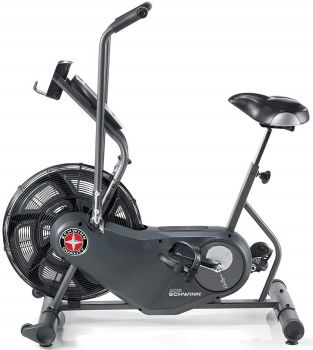 The Schwinn AD6 is an airdyne indoor exercise bicycle which uses a fan for availing the resistance. Generally, the exercise bikes using fans provide infinite resistance without adding any weight to the equipment.

Further, the AD6 has excellent sync of the paddle and handlebars. It will not only focus on the lower but also upper body because of its infinite resistance and Biosync.

Generally, people expect to have intense cardio as well as muscle development exercise choose to go for HIIT workouts. However, even the HIIT sessions in an upright bike hardly have upper body involvement other than core.

Hence, the Schwinn AD6 Airdyne finds its application. It not only focuses on cardiovascular functioning but also on muscle development.

Furthermore, in this section, we have described the uses and importance of various components of this bike. You can find distinct features Schwinn AD6 has to offer from these sub-sections.

Additionally, moving the whole bike in the tilted condition will not be an easy job to do. In fact, the forget moving the bike if you have a fluffy smooth carpet in between. The wheels are of small diameter and get stuck almost around the smallest of obstacles.

Therefore, the wheels will be useful if you have to move the bike all by yourself inside the house. However, do not prefer relocating the bike every now and then, it will not only damage your floor but also increase possibilities of accidents. 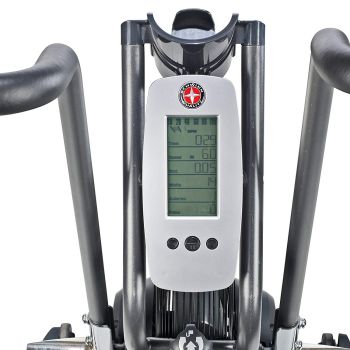 Schwinn AD6 airdyne upright exercise bike has one of the best-equipped fitness consoles. It shows speed, exercised time, distance, calories burnt, and the best heartbeat rate. The best feature of the heartbeat receptor is telemetric and produces high-accuracy results.

However, the only downside about the fitness display console is that it does not have the backlight availability. It makes impossible to work out in the darkroom if you need to check the speed, time, etc.

Not to mention the bottle holder right in the front of the console. It helps you collect and keep a water bottle in the near-proximity during the workout.

Adding to the fact, the fan of the AD6 bike comes with a great amount of smoothness. It will never produce unwanted resistance fur to malfunction but only the resistance due to air. However, many people have noted that the spinning fan tends to produce some noise.

Nevertheless, the progressive resistance from the spinning fan is a great feature. It will not only be suitable for long cardio hours but also intense HIIT full-body workouts.

In addition to that, you can also use the either of paddles or handles at once for focused exercises. The Schwinn AD6 airdyne upright exercise bike allows you to use only paddles if you need to take a leg day. Also, it allows you to rest your legs on the foot-rests and continue with the upper body exercise. 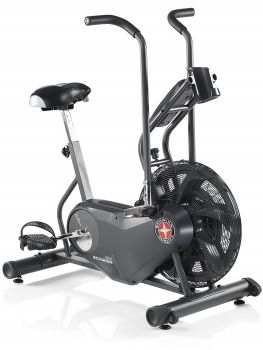 The three-bar pivoting linkages of the Schwinn AD6 airdyne upright exercise bike are in the perfect sync. As the makers of the bike proudly display this feature namely Biosync in their product ad-posters.

It means their indoor exercise bike gives the users benefit if deep-tissue stimulation and strengthening. Usually, this is not the case with all the standard upright bikes. But, due to the smooth links the knee and shoulder joints of the user will hardly face any injury. In fact, it can trigger the movements of even the smallest muscles around deltoids as well as thighs.

Not to mention, you can also perform the insolation exercises on this bike. It means going for either upper or lower body workout is easily possible on this bike.

Look for the positives and negatives of the Schwinn AD6 airdyne upright exercise bike in this section.

The Schwinn AD6 airdyne upright exercise bike is hence the best option for having full-body workout inside the house. Not to mention the Biosync therapy it delivers helps in strengthening small muscle group along with building the bigger ones. On the contrary, the console of the bike could have been more useful with a backlight.